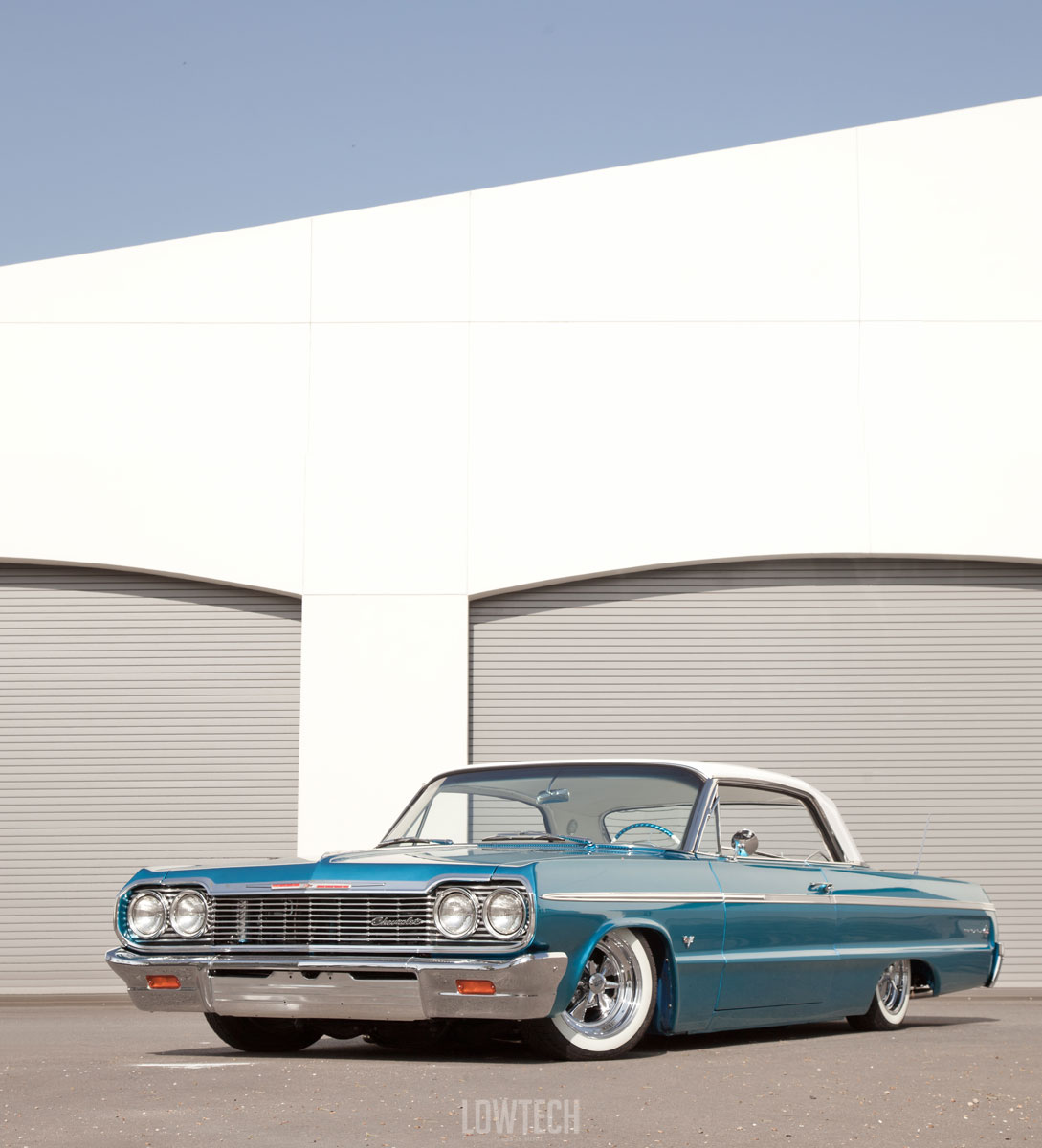 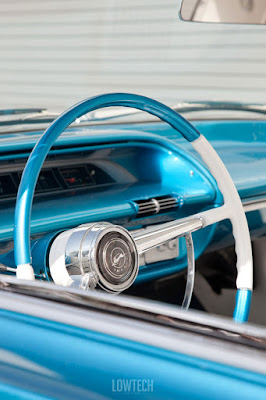 The 1964 Chevrolet Impala is kinda like the blue jeans of classic cars. It’s got a timeless styling, a solid construction, and it fits whatever look you’re after. In other words, you’ll be hard pressed to find any other car make and model that makes it look seemingly effortless being a mild kustom candidate, a drag strip hero, a collector’s favorite and a lowrider icon all at the same time. Dylan Odbert from San Clemente, California, couldn’t agree more. He currently owns two 1964 Impalas: an original unrestored one as his daily driver, and this beauty, a lowrider with a mild kustom soul. Or is it the other way round? We’re gonna find out soon.

Dylan grew up in Sacramento, which is considered by many to be one of the birthplaces of lowrider culture, besides of being the capital of California. No wonder, already at an early age, Dylan fell for the impressive sight of lowrider Impalas, cruising the boulevards of his home town. »I was born in the 1980s, but even at that time, lowriding still was an important part of the local car culture. Going low and slow definitely made a lasting impression on me.« 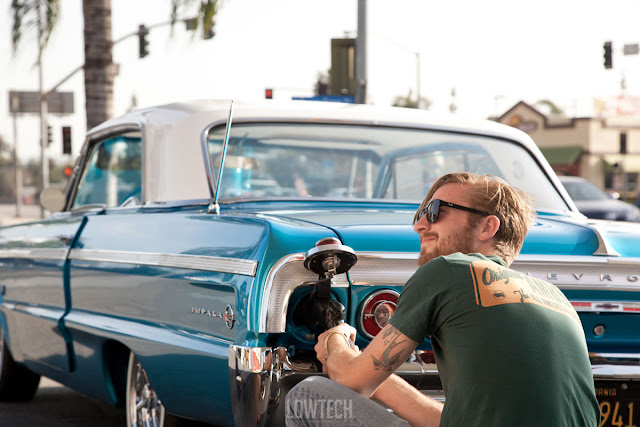 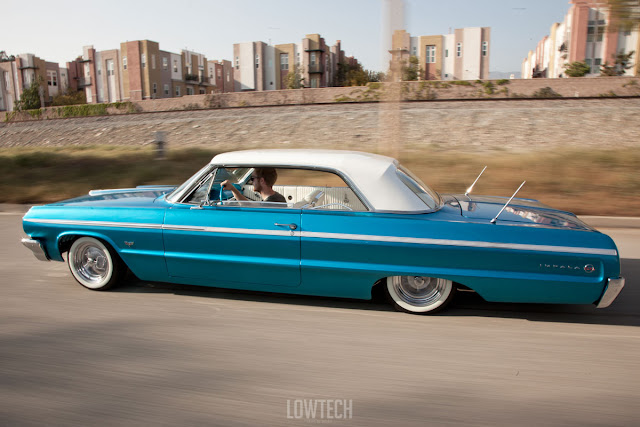 A lasting impression also resulted from the countless hours he spent at his dad’s garage. Garry Odbert is a true old school hot rodder, still owning his very first roadster from high school days. It’s also Garry who taught Dylan the correct use of welder, wrench and power hammer. Experiences, that soon would turn out to be very valuable. Learning for life as they say, in the best possible way. 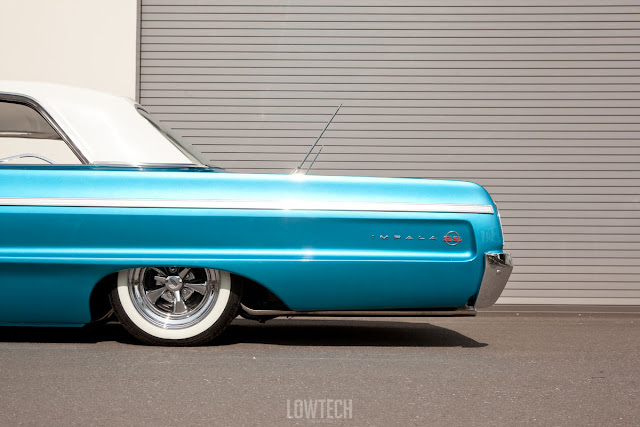 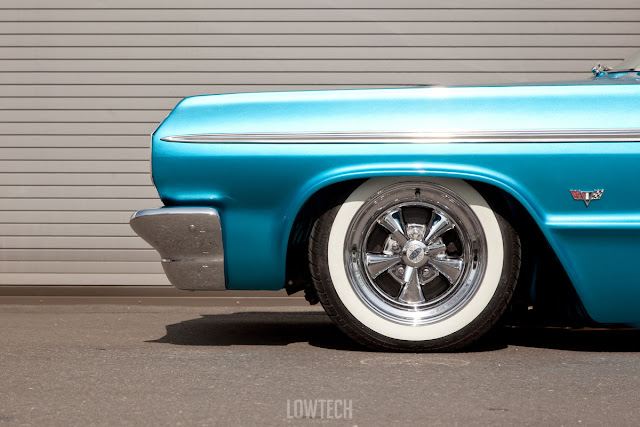 When Dylan’s high school time was approaching, he eagerly started collecting ideas for his future means of transportation. The family had just moved from Sacramento to Arroyo Grande , a laid-back, mellow small town at the California central coast and Dylan was able to extend his search even further south. 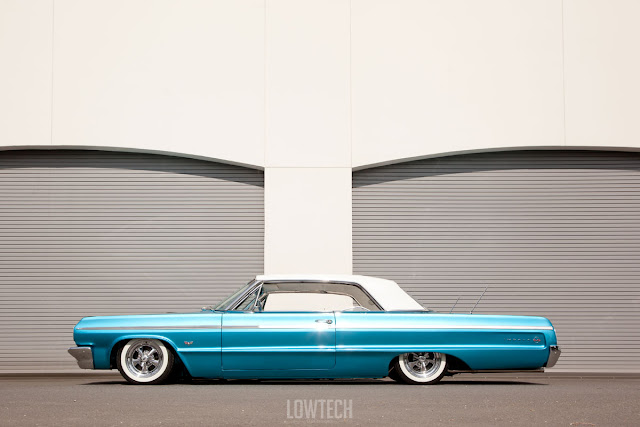 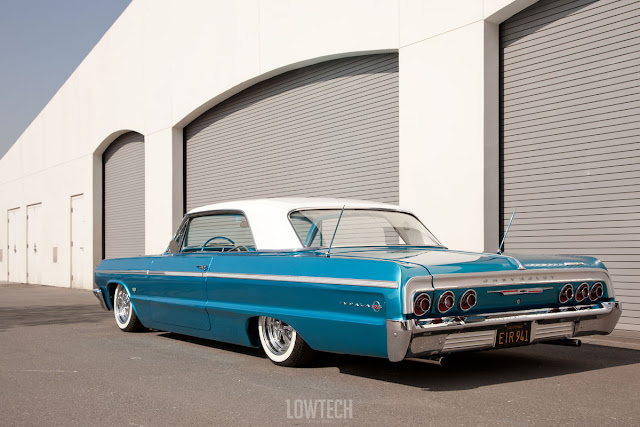 It was on the countryside north of Los Angeles where he got lucky: a 1964 Impala Coupe. Or what was left of it. »Dude that car was a wreck« Dylan remembers with a laugh. »The interior was gone, the trunk floor and the rear quarters were rusted out, and one of the front fenders was completely torn.« Nevertheless, Dylan, being a 15-years old high school kid now owning a 1964 Impala, was one happy camper when he proudly dragged his find home. 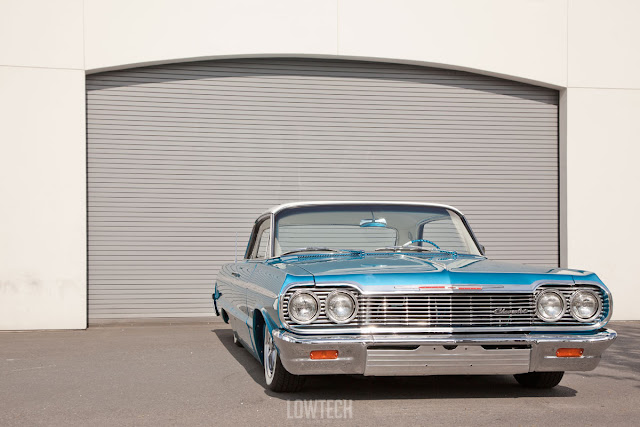 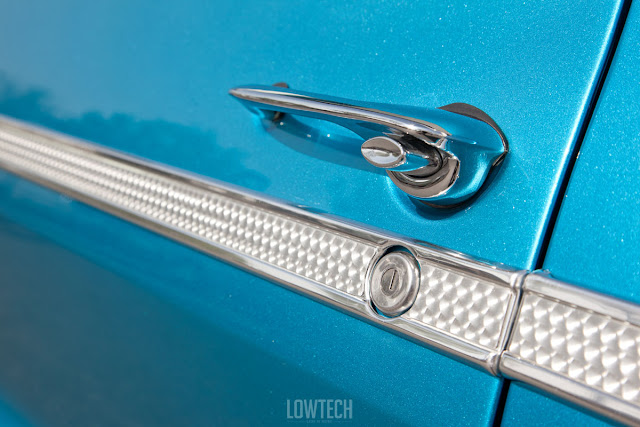 To get this project started, Dylan made a list of all the missing parts. A lot of the small stuff was gone, but thanks to the help of Mario Hernandez, he was able to track down the Impala’s missing bits one by one. Much more head scratching was caused by the sheet metal work, which Dylan did for the most part by himself but under the guidance of his dad Garry. 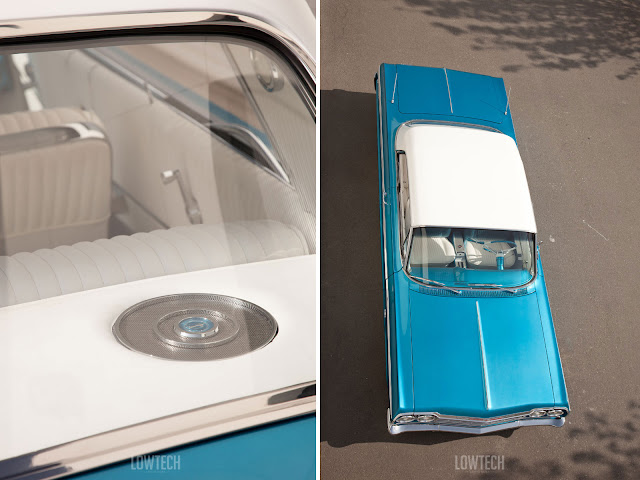 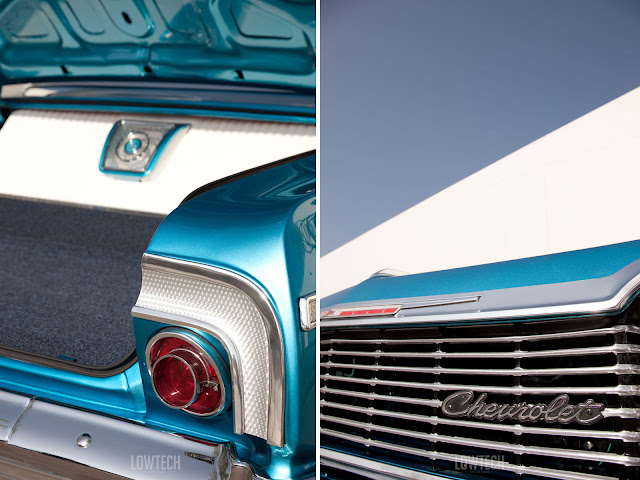 Dylan even managed to straighten that heavily bent fender. Just as impressive is the fact that he masterfully applied the candy blue paintjob. He also relied on some accomplished mentors in this field: »Jr Cechetti, Paul Cepeda and Ray Cano all were patient in showing me the secrets of spraying candy paint. Without the three of them, I wouldn’t have made it.« 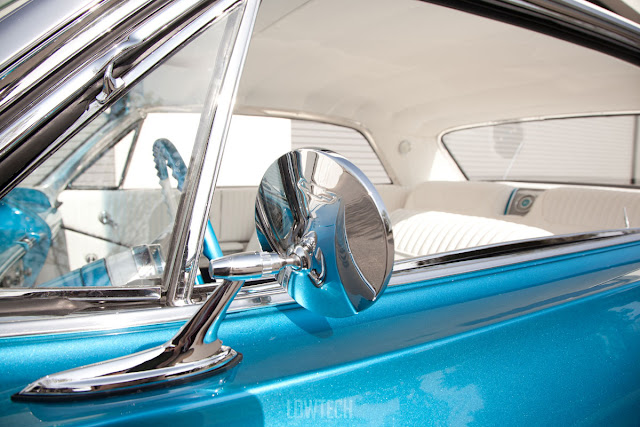 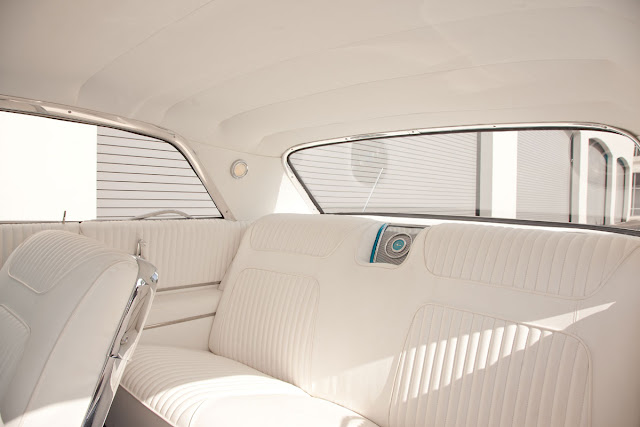 Seven long years went into the restoration of this Impala. Several times, the project came to a halt, most often for such side issues like getting a high school diploma or starting an own company… »A couple years ago, my brother Dustin and I created the California menswear brand ambsn. And since Arroyo Grande was a bit far from the industry, we decided to move to San Clemente in Southern California.« 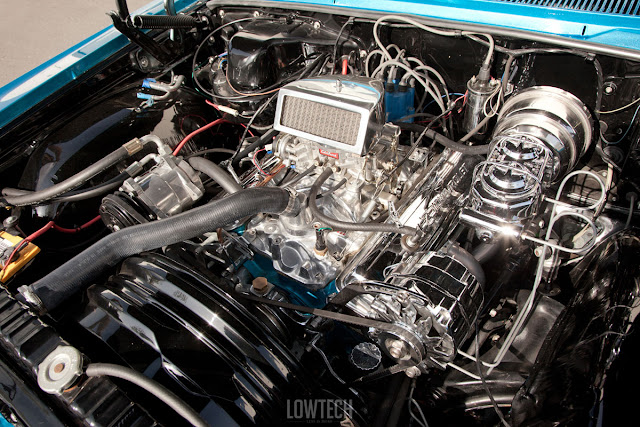 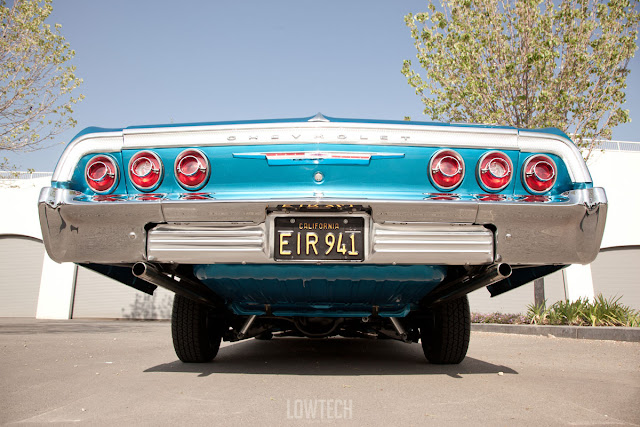 But even this important move didn’t stop Dylan from turning his childhood vision into reality. He still fondly remembered the boulevard cruisers from his youth, so there was no doubt for the direction of his own sixty-four Impala. As with every car build, getting the stance right is mandatory, so Dylan opted for an AccuAir E-Level air ride system. 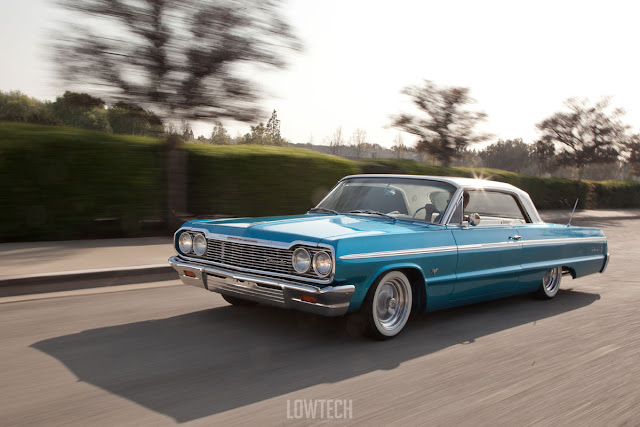 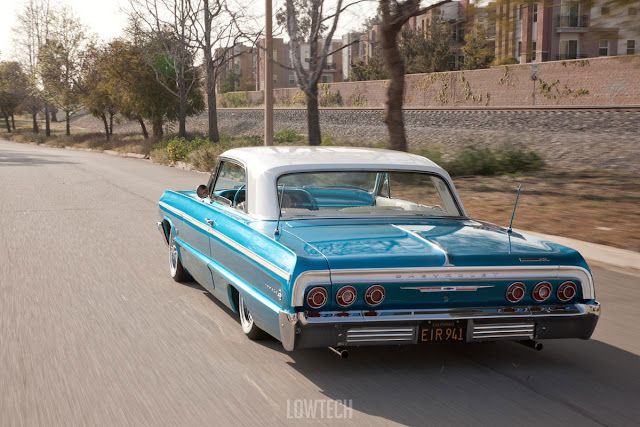 The Cragar S/S wheels are a great choice, too, as they are right at the threshold between custom and lowrider, further emphasizing on that mid- to late-sixties boulevard cruiser style Dylan was after. While most people would have chosen some skinny whites, he went for some wider white walls that work great with the blue and white paint scheme. 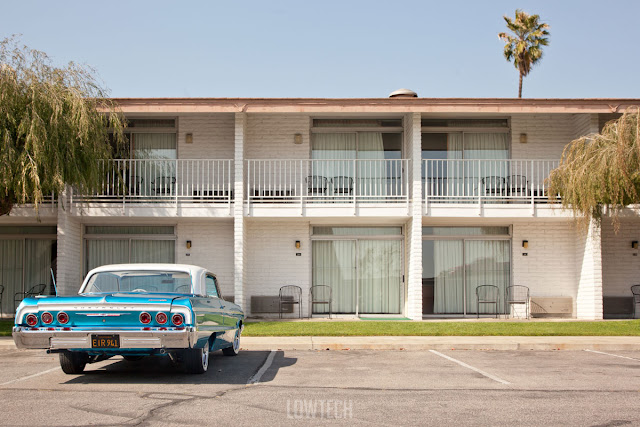 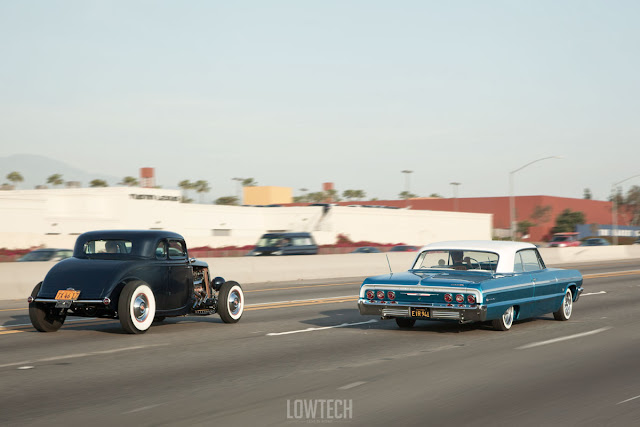 Finally, a completely rebuilt small block 350 and a TH350 automatic transmission make sure Dylan is going to make it wherever he wants to go. Even if it’s just low and slow, the way it was back in Sacramento.
Source: Hot Rod Blog